Led by NASA JPL, Team CoSTAR will participate this week in the SubT final to demonstrate the autonomy of several robots in a series of tests in extreme environments.

Eight teams comprising dozens of robots from more than 30 institutions, including NASA’s Jet Propulsion Laboratory in Southern California, will converge in a former Kentucky limestone mine from September 21 to 24 to participate in a series of complex underground scenarios. The goal: to demonstrate cutting-edge robotic autonomy and compete for a chance to win $ 2 million.

Sponsored by the Defense Advanced Research Projects Agency (DARPA), the event marks the last competition of the Subterranean, or SubT, Challenge, which began three years ago, attracting engineers from around the world. The challenge aims to develop autonomous robotic solutions for first responders in underground environments where GPS and direct communications are not available.

But the technologies developed for the SubT Challenge and the exploration of extreme environments on Earth also have direct applications for space exploration. The JPL-led CoSTAR (Collaborative SubTerranean Autonomous Robots) team will showcase their collection of driving, walking and flying robots that could one day be used to explore extreme terrain on the surface as well as indoors caves and lava tubes on other worlds without human help.

“Our goal in SubT is not competition. Rather, it is an incredible opportunity to accelerate technological development and develop new autonomy and AI. [artificial intelligence] capabilities for NASA and for the good of humanity, ”said Ali Agha, JPL roboticist and CoSTAR team principal investigator. “In particular, with regard to NASA’s quest in the search for life beyond Earth, the autonomy of NeBula and the technologies developed by participating in this competition may be used in the future by robots. who can explore extreme and difficult places on other worlds where signs of extinct and existing life can be found. “

The CoSTAR team’s Rollocopter uses a quadrotor system to fly or ride on two passive wheels. When it encounters an obstacle while driving, it can simply fly over it. Credit: NASA / JPL-Caltech

The SubT Challenge started in 2018 and consists of two tracks: the Systems track and the Virtual track, both divided into three sub-areas, or events – the Tunnel, Urban and Cave circuits. While the virtual competition focuses on developing software that can participate in simulation-based events, the Systems competition focuses on physical robots that operate in real field environments. This is why the CoSTAR team is committed: to develop AI and autonomy software solutions for physical robots capable of navigating in difficult and new environments.

The Tunnel Circuit took place in August 2019 in mining tunnels beneath Pittsburgh, with the CoSTAR team placing second; they took first place in the street circuit, which was held in February 2020 at an unfinished power station in Elma, Washington. The Systems Competition Cave Circuit was canceled in fall 2020 due to COVID-19 restrictions.

The CoSTAR team relies on a wide range of robots to achieve mission objectives. They first send out robot scouts to explore the environment, then select a subset of robots best able to collectively meet the overall mission objectives based on their mode of locomotion. 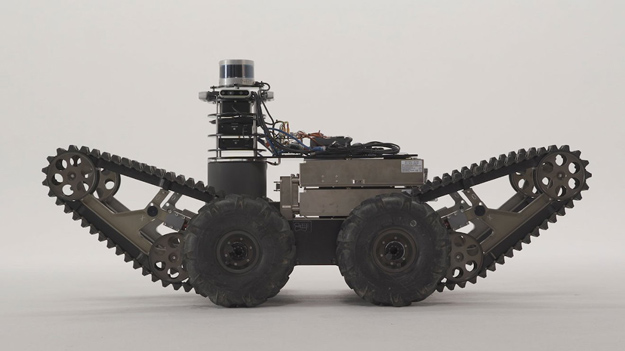 The SubT Challenge’s range of environments require different modes of locomotion and a wide range of robots to accomplish complex tasks. The CoSTAR team can use wheeled and tracked robots to cover the ground faster when obstacles are few or the terrain is rough. Credit: NASA / JPL-Caltech

“The final competition will be particularly difficult, as we have to use wheeled, legged and flying robots to access all of the complex spaces that DARPA will bring into the competition. I am delighted to see how our very diverse robot team will perform. “said Joel Burdick, professor at Caltech and researcher at JPL who heads the Caltech campus section of the CoSTAR team.

The robots will also produce a live 3D map when they locate objects that represent a disaster response and search and rescue scenario, such as dummies (to simulate human survivors), cell phones and bags. backpack spread in a vast environment.

“Our participation in this exciting effort helps promote one of the main goals of Caltech’s Center for Autonomous Systems & Technologies (CAST): to develop robots that can help find and rescue humans in future disasters,” said Burdick.

Watch the CoSTAR team and their team of robots prepare for the February 2020 DARPA Subterranean Challenge street circuit during a practice at Elma High School in Elma, Washington. The team finally placed first. Credit: NASA / JPL-Caltech

Environmentally specific artifacts will also be present, such as a carbon dioxide emitting source that mimics an urban gas leak, or a helmet in a cave that would indicate a human presence nearby. The robot team must operate autonomously, for the most part, without radio contact or limited contact with a single human supervisor, and the mission must be completed within an hour. The more accurately they can cross objects, reach, identify and locate, the more points they earn.

“It’s a complex challenge for the hardware and software design, but also for the diverse team that has persevered through the challenges we face in competition and the real world over the past three years,” said Benjamin Morrell, robotics technologist at JPL and responsible for perception. on the CoSTAR team. “It’s amazing to see what the team has produced, and I’m delighted to see our system put to the test against some of the best robotics engineers in the world. I’m also excited to see how SubT will launch new advances in improving autonomous robots. “

For more information about the CoSTAR team, visit: https://costar.jpl.nasa.gov/

With its latest mission, China renews its wish for space cooperation