A 19-year-old master student and JPL intern, Natalie Deo is aiming for a career at the Laboratory, and she wants to prove that it’s never too early to pursue her dreams.

To hear Natalie Deo explain why she wanted to drop out of high school at age 14 and go straight into higher education is to hear it from the perspective of a precocious teenage girl wise beyond her years – and of his peers.

“I was walking through the first period in high school and saw a couple kissing and I was like, ‘I’m getting out of here. I don’t want to see this, ”said Deo, now 19 and a summer intern at NASA’s Jet Propulsion Laboratory, unmoved.

Not that she hadn’t thought about speeding up her exit from high school before then, of course. Deo, who grew up in Downey, Calif., Was already familiar with the highly Selective Early Entry Program, or EEP, at Cal State University, Los Angeles, which puts gifted students on a fast-track path to admission to the college, and she had taken ACT while in eighth grade. After completing the ninth grade, she was one of a handful of high school students selected to begin her undergraduate studies in electrical engineering at Cal State LA.

“I was tired of being around people who weren’t so motivated. People would beg me to do their homework or try to pay me to write their essays, ”she says. “While that wasn’t the case with all of my peers and some even really supported me, it was cool to go to college and be surrounded by more like-minded people.”

Today, Deo is pursuing his Masters in Astronautical Engineering at USC while interning at JPL with the Europa Clipper spacecraft development team. These days, you could say that Deo is surrounded by like-minded people all the time.

“USC is close to my home and JPL, and JPL has been my dream since I knew I wanted to work in space,” Deo says.

Deo first realized she “really, really loved space” at age 13 after winning a telescope in a raffle at the Columbia Memorial Space Center in Downey, and found herself staring at the Moon every night. Soon after, she began volunteering at the space center every weekend, helping to organize field trips and robotics labs for young visiting students (which she still does to this day). .

Meanwhile, Deo was introduced to a STEM engineering class in college while in seventh grade.

“My teacher contacted me and said, ‘You might like it’ and I thought, ‘Well, that’s either it or a band,’ she said.

Deo tried the course, which introduced basic engineering concepts in the first year around design, modeling, and the engineering process. The second year focused on automation and robotics and put the skills of the students to the test in regional competitions.

“Before I knew it, I spent every day after school working in robotics,” she says.

By the time she enters high school, nothing fascinates her anymore.

“High school was pretty easy for me and what we were learning didn’t intrigue me as much as engineering,” Deo says.

Once Deo decided to officially enter PSE, she had to attend a rigorous summer academy where students are assessed by college admissions staff to see if they are doing well at the college level. In the Cal State LA program, approximately 500 to 1,000 students apply each year and only approximately 20 to 30 students are admitted.

Deo was traveling with his mother and grandmother when she received the call to accept.

“I was screaming and my mom had to stop because she was screaming,” Deo says. “My brother and my father were at home, I called them and they were screaming on the phone. There was a lot of screaming. “

Thinking back to her time at the Summer Academy, Deo marvels at the odds she overcame to be admitted.

“I didn’t realize it that summer, but I wasn’t like most of the students there whose parents had PhDs and were established in their fields,” she says. “I had parents who immigrated from Fiji. My mother came [to the U.S.] at 8 and my dad arrived at 22 without a college education. I grew up in a poor neighborhood compared to a lot of these students, and I didn’t have the resources to prepare for college that a lot of other students did. I also have type 1 diabetes. It was special for me [to be accepted into the program] because this girl was facing adversities of all kinds – and she succeeded. “

While the decision to quit high school was an easy one, arriving at college left Deo struggling with impostor syndrome.

“The first year, I just took general education courses with my cohort [of EEPs] that help you make the transition, and I just had fun with them, ”Deo says. “Then it started. I had no idea how college worked – my brother was still in his last year of high school at the time. I saw all these people that were so smart and came from very well-off backgrounds and were into literature and stuff like that. I never really liked it. People just knew things that I didn’t know and I was like, “Do I know this? Do I belong here? ‘ “

Deo credits therapy, talking to friends, and reaching out to family as ways for her to overcome these difficult first months. She also stayed in touch with her childhood friends and had the high school experience while studying.

“I’ve always been to prom, soccer games and hanging out with my friends all the time,” she says. “I was able to have the best of both worlds. “

JPL internship, mentoring and beyond 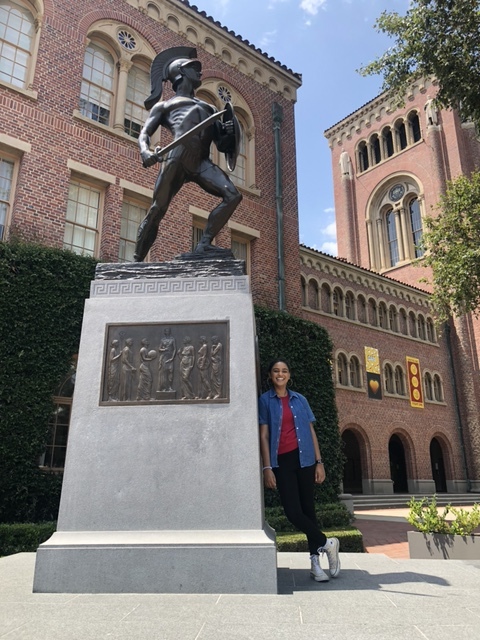 Deo poses for a photo on the USC campus, where she is pursuing her Masters in Astronautical Engineering. Image courtesy of Natalie Deo | + View larger

At JPL, rumors of a 19-year-old summer intern completing her masters did not faze Deo at all.

“I threw a trainee party the other week, and everyone was like, ‘Are you the one that’s 19 and in college?’ And I’m like, “Yeah, it’s me, but I’m also Natalie and I have a Lego collection,” she laughs.

Deo’s internship responsibilities extend beyond his years, of course. So far this summer, she has been working on validating and verifying commands sent to Europa Clipper’s computer system, ensuring that the spacecraft’s instruments respond correctly to commands.

Although she admits that she still struggles with impostor syndrome at work, she becomes more and more comfortable as the months go by and she gets closer to her fellow interns.

“The female to male ratio is much higher here than in my previous internships,” she says. “I see myself more in the people around me, and it helps me to be able to interact with other interns and have them as a support group. I hang out with them every weekend and have made lifelong friends already.

Deo is also part of JPL’s Employee Resource Group Mentorship Program, or ERG, which has paired her with a secondary mentor – a mentor who supports a mentee outside of the mentorship provided by their manager – through the JPL Women’s Advisory Council, or ACW.

“This type of mentoring is based on professional and academic advice, and to help interns develop their soft skills,” says Alona Dontsova, spearhead of the human resources program at JPL. “If the manager is focused on developing technical skills and managing projects, ERG mentors help with networking, review their resumes, listen to their arguments, or give them more professional development advice. The ERG mentor is also more focused on teaching interns about the JPL culture.

Deo’s secondary mentor, Lynn Boyden, is “very happy that the planets have aligned this way” to be paired up, and strongly believes that mentoring is a two-way street.

“Learning goes both ways… and one of the ways we do it is to share knowledge across these divisions,” she says. “Sometimes there are situations that are beyond an intern’s ability to navigate institutional practices, and this is where having a mentor with more in-depth experience in the business world can come in handy. In addition, one of the main functions of an internship is to help an intern build a professional network, and having another designated person at JPL can only help them expand that network.

For her part, Deo is thrilled to have someone she can be candid with.

“I can have conversations on JPL that might be intimidating to ask my group supervisor,” she says. “Like, ‘How can I say please hire me without saying please hire me?’

Deo isn’t afraid of her next goals, including being hired as part of JPL’s part-time college program while she completes her masters. And although the virtual internship experience was a challenge for her, “I really like the hands-on work,” she says. Deo felt the rewards of his internship and mentorship every day.

The lab’s STEM internship and fellowship programs are managed by the JPL Education Office. Expanding the reach of the NASA Office of STEM Engagement, JPL Education seeks to create the next generation of scientists, engineers, technologists and space explorers by supporting educators and bringing the excitement of missions and science from NASA to learners of all ages.

Career opportunities in STEM and beyond can be found online at jpl.jobs. Learn more about careers and life at JPL on LinkedIn and by following @nasajplcareers on Instagram.

How to watch the NASA launch on Jupiter