News from HT: 18 NDRF teams deployed in Andhra, Odisha for Cyclone Gulab and all the latest news | Latest India News

How AI technology could improve driving and road safety for police

Yuri Gagarin’s space flight literally changed life in the Soviet Union. Space exploration has become the pride and joy of the country, and a major art theme, both official and unofficial.

The theme of space was literally everywhere in the USSR: paintings, posters, building / metro mosaics, postage stamps. The artists were inspired by the image of Gagarin, cosmonauts in spacesuits, the starry sky and, of course, futuristic rockets. Here are just a handful of their cosmic creations.

The successful flight and return to Earth of the world’s first cosmohounds, Belka and Strelka, caused a stir. They became so popular that their images were reproduced everywhere from New Year’s cards (photo) to matchboxes. 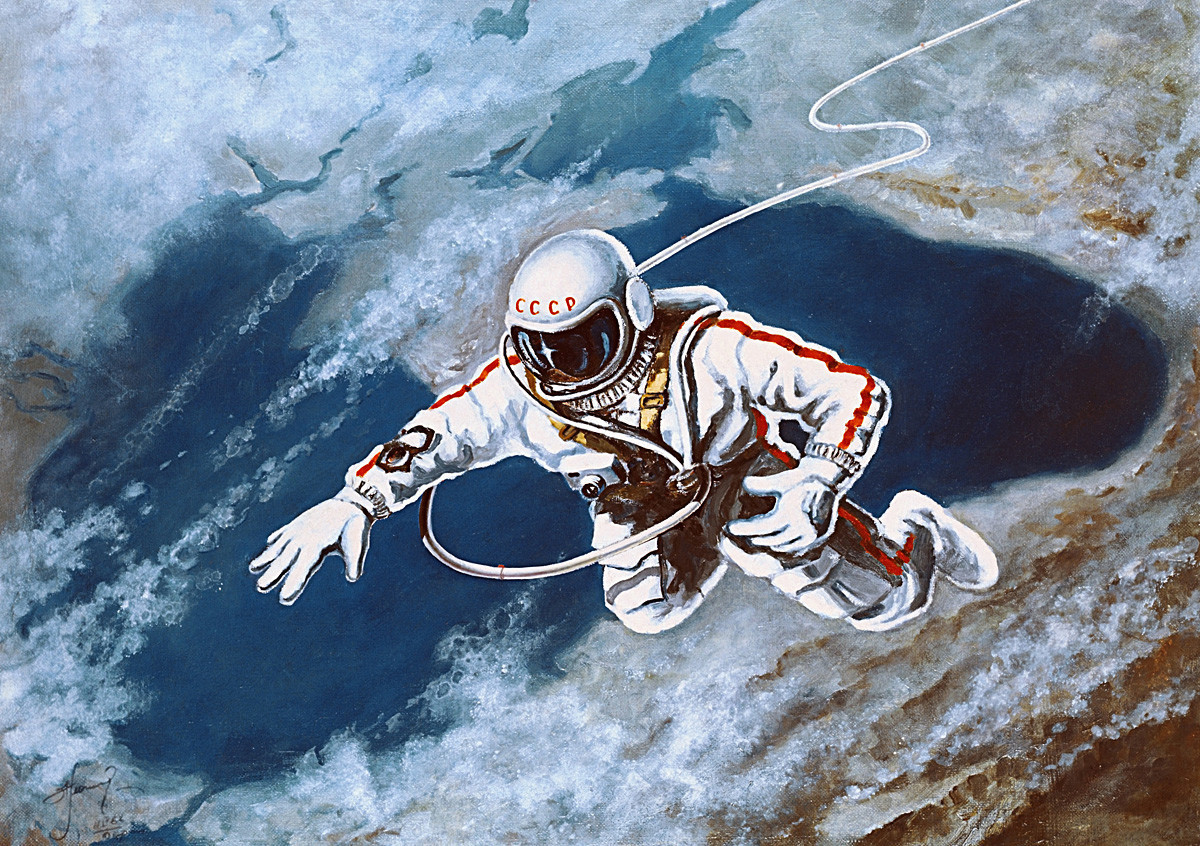 Cosmonaut Alexei Leonov is best known as the first person to perform a spacewalk. But he was also an artist, who represented his escape in a series of paintings. 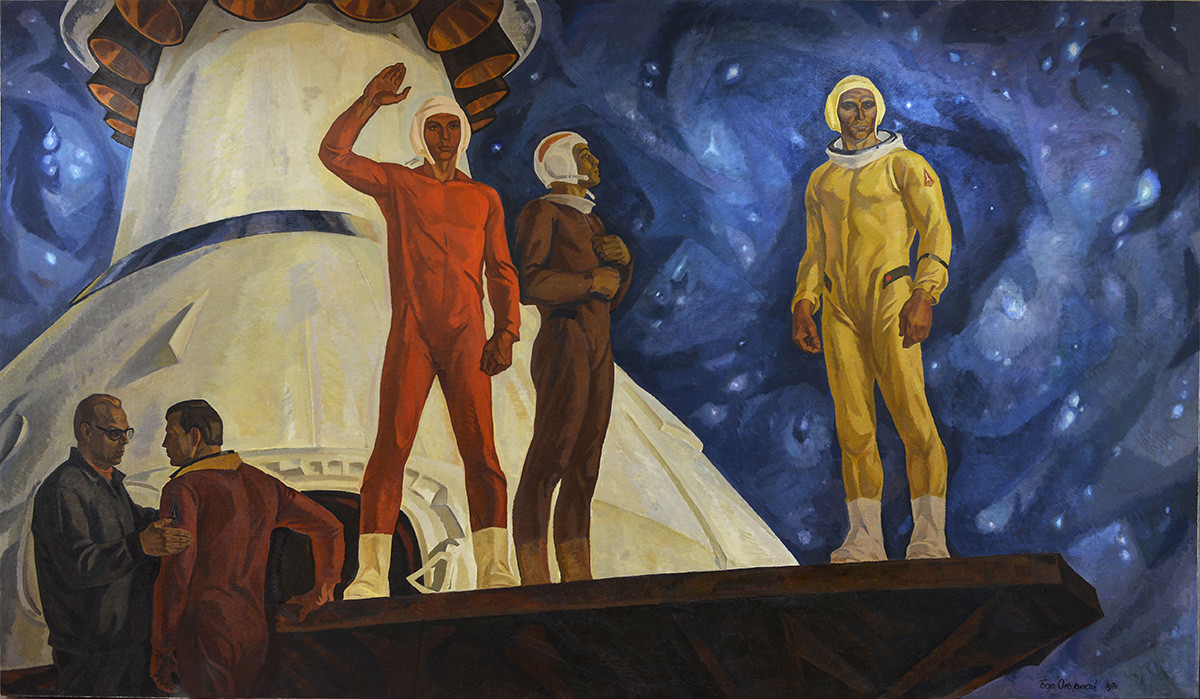 Having been kept for many years in Poland out of public view, this monumental five-meter canvas was recently restored and returned to Russia. 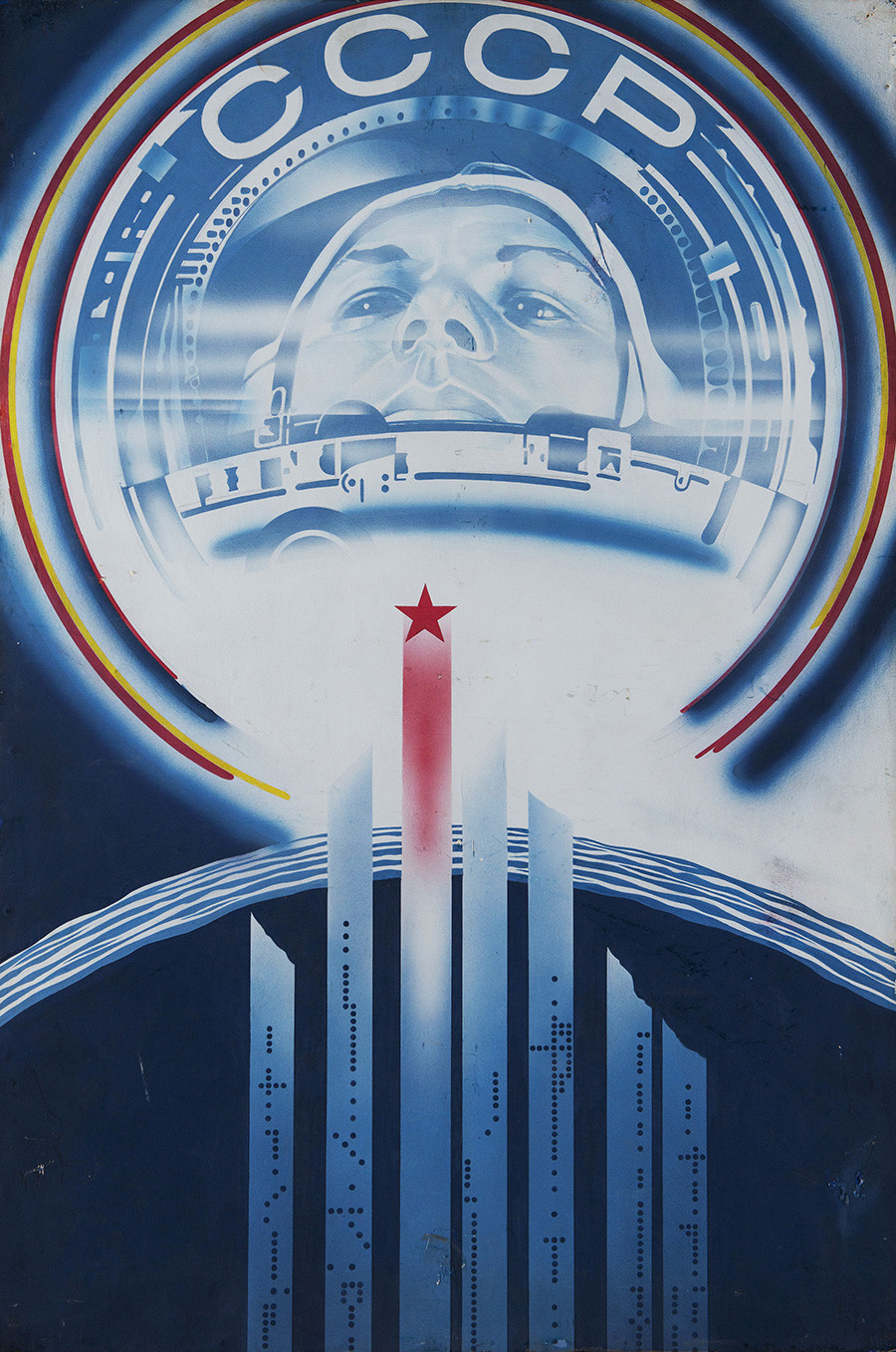 These three artists co-wrote numerous Soviet propaganda posters. They represented the country’s achievements in the field of cosmonautics in official canvases that inspired national pride. 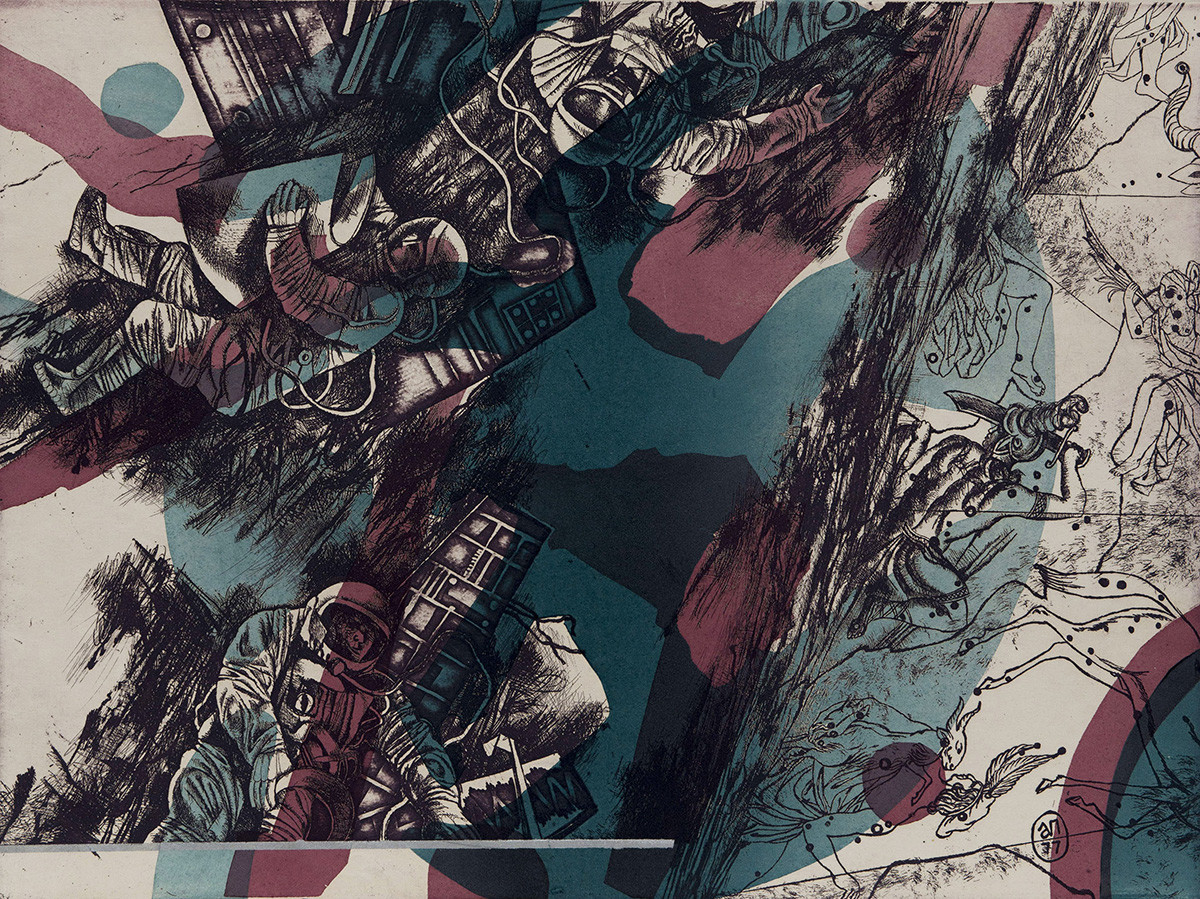 Graphic arts master Anatoly Plakhov was fascinated by cosmism, a space-themed philosophical movement that emerged in Russia at the turn of the 19th century. He has created several works imaginatively combining cosmic imagery with mythical objects and constellations. 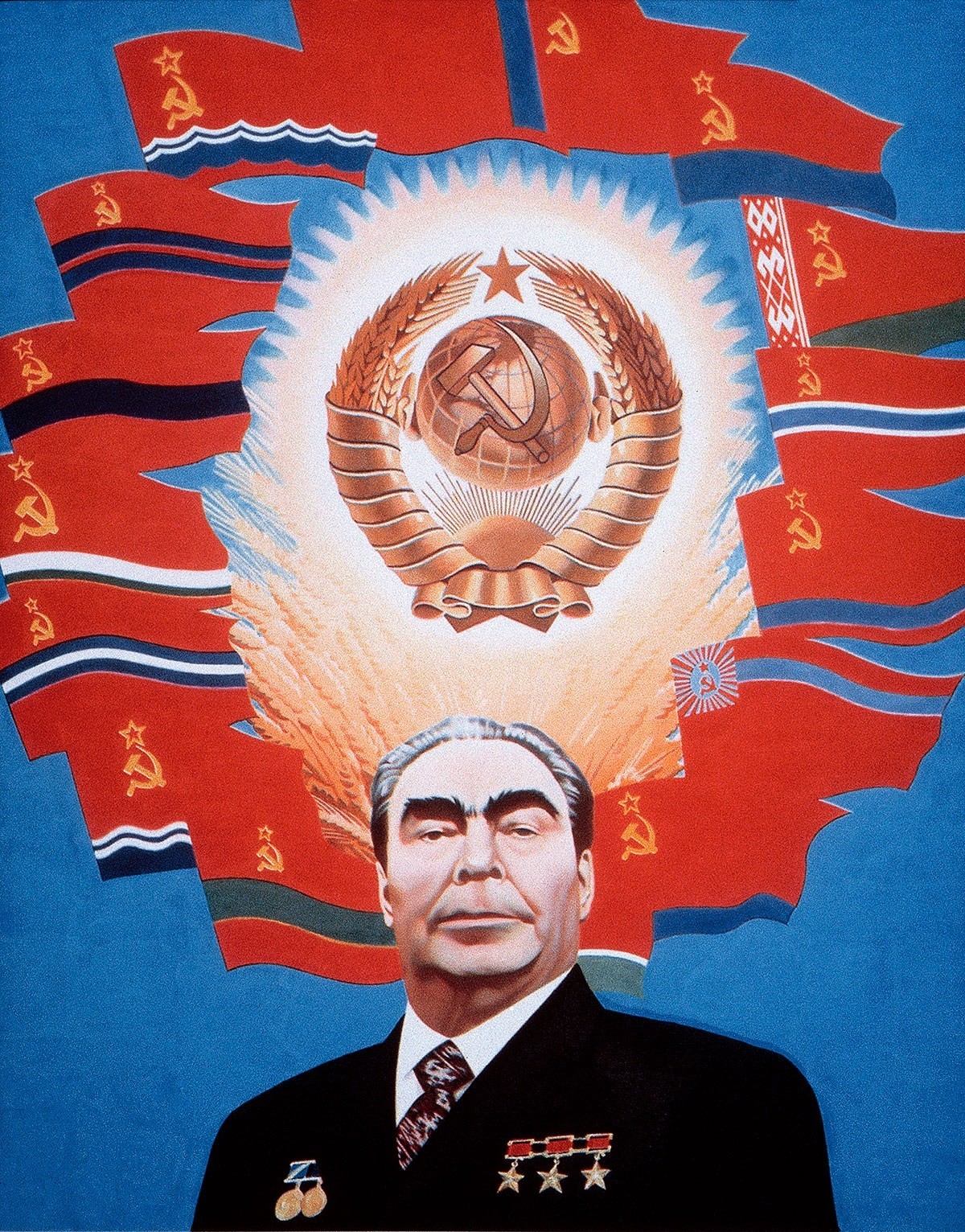 The Museum of Avant-Garde Mastery (MAGMA)

Erik Bulatov’s paintings look like Soviet propaganda posters. That said, the artist was a representative of Sots Art, and his hypertrophied representations of Soviet symbolism are meant to ridicule “the abnormality of this life which our minds perceived to be normal.” 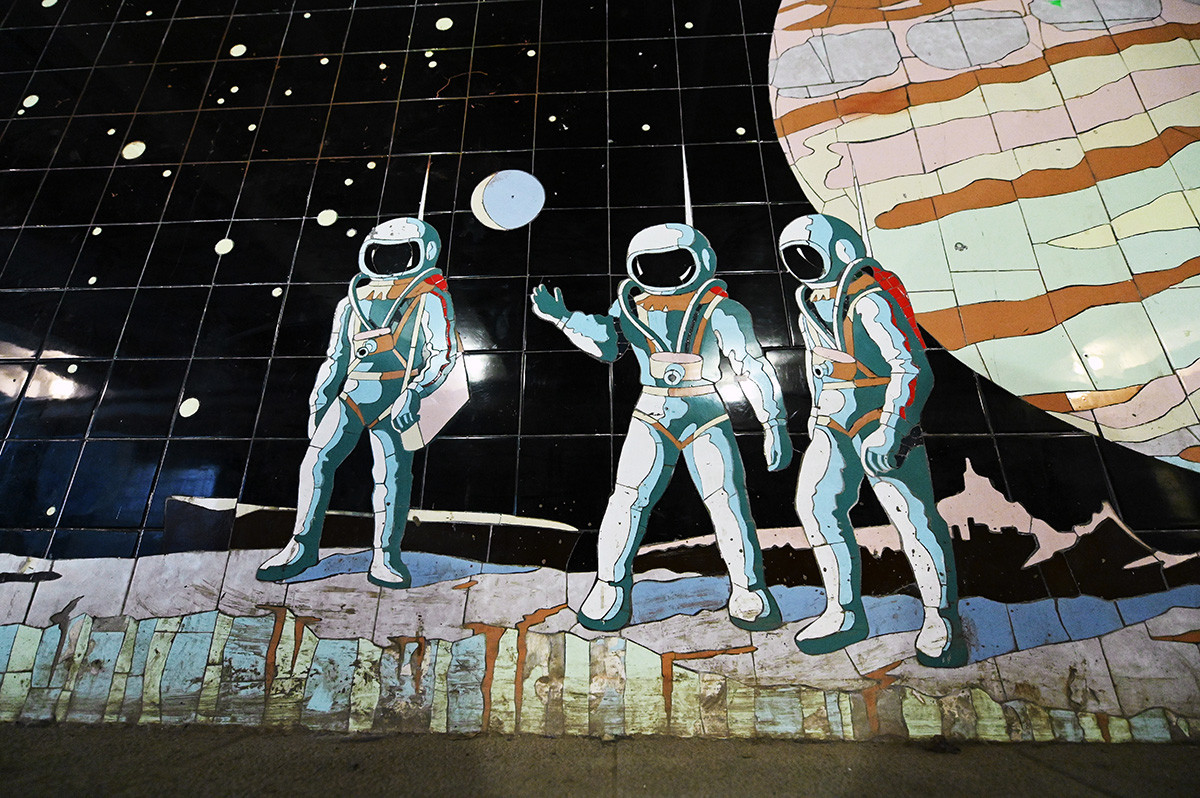 The city of Rostov-on-Don in southern Russia is famous for its underground passage mosaics. There are real masterpieces there, recognized as objects of national cultural significance. One of these underground passages is entirely on the theme of space. 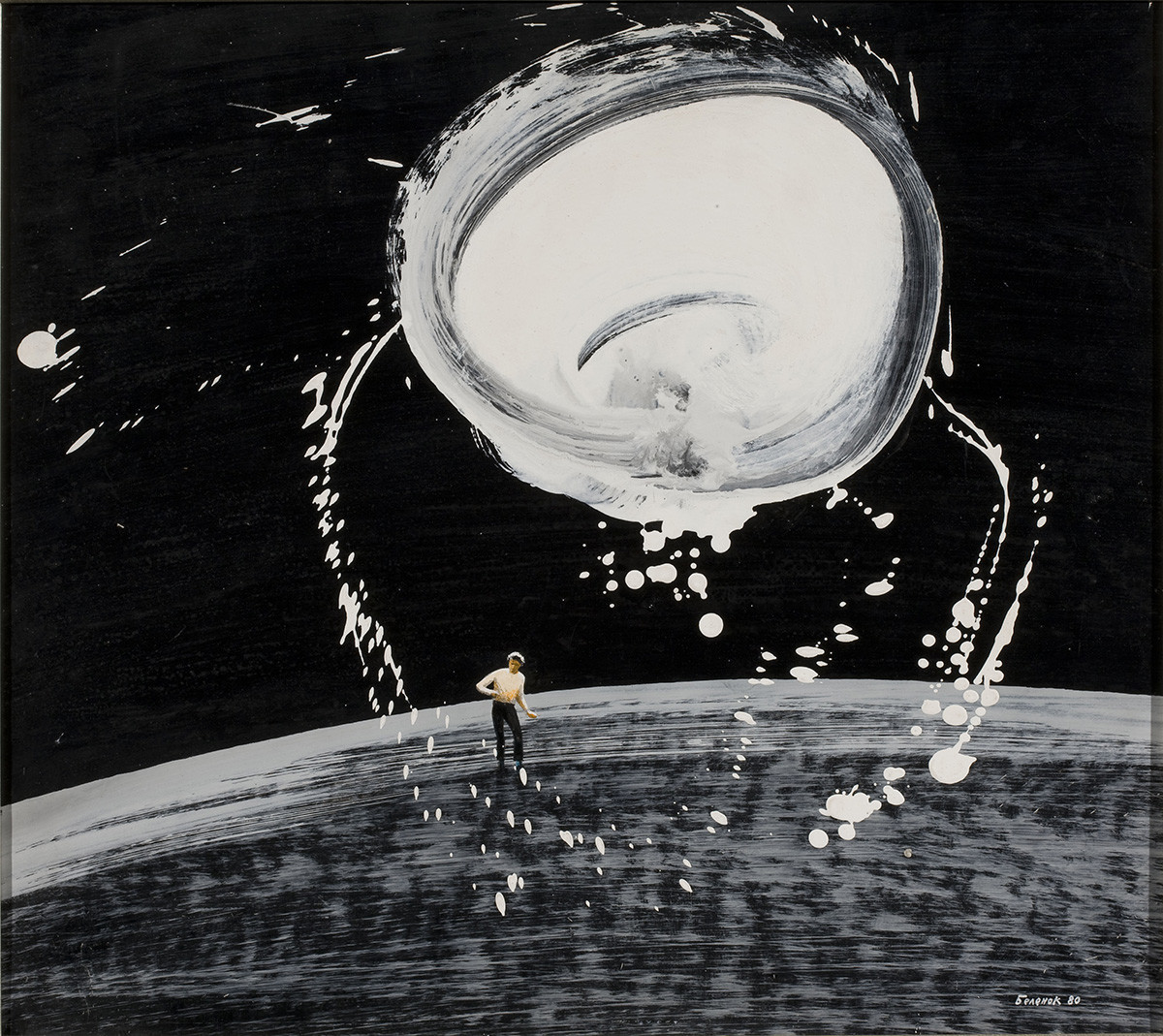 The connection between humans and space has also inspired unofficial artists, including Petr Belenok. Through astronomical objects, he expressed his idea of ​​the structure of the Universe. 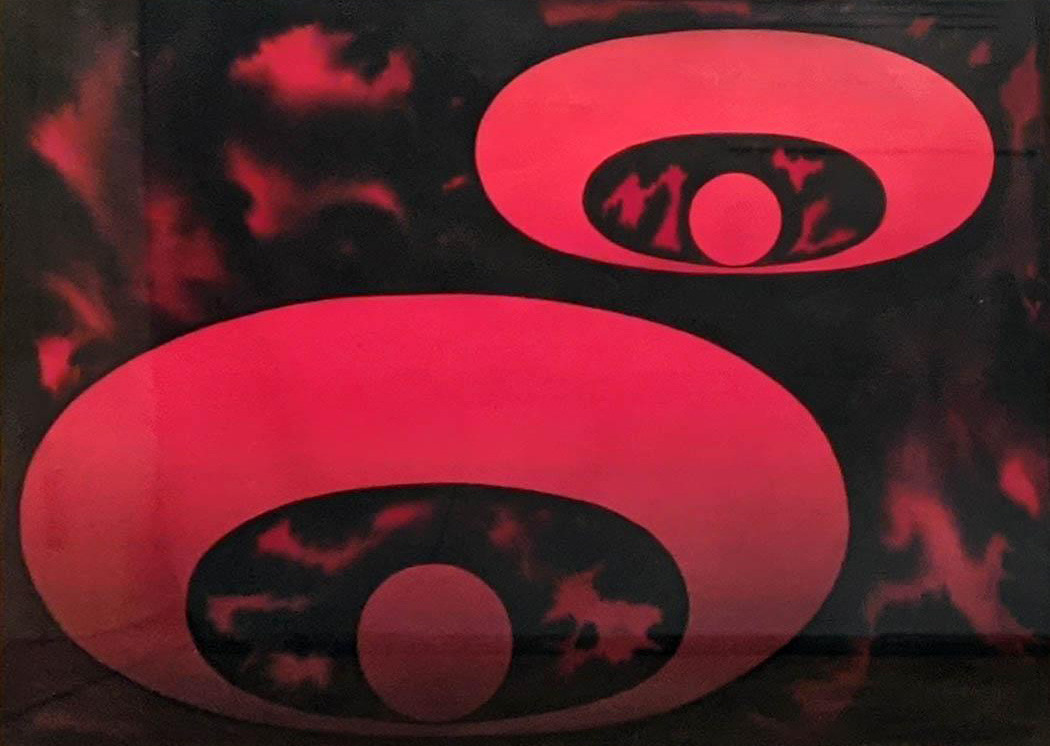 Speculations and legends about cosmic objects and human relationships with extraterrestrial civilizations quickly became a trending topic. Here is the depiction of a UFO by avant-garde artist Nikolai Vechtomov, the most popular myth of the Soviet world. 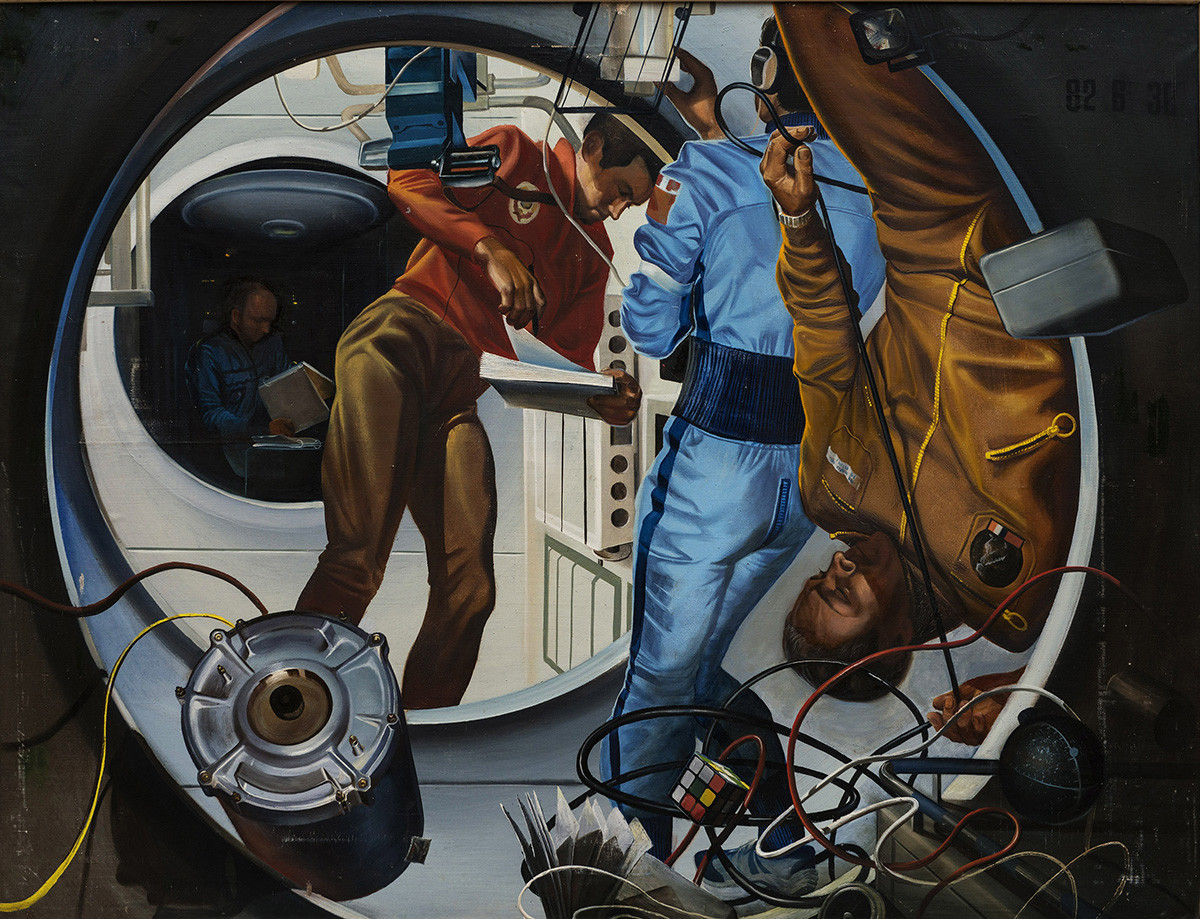 The professional life of cosmonauts aboard the Mir space station (“peace” in Russian) was portrayed by artist Mikhail Borisov, who showed that in addition to being important heroes and scientists, they are also ordinary people doing their job. 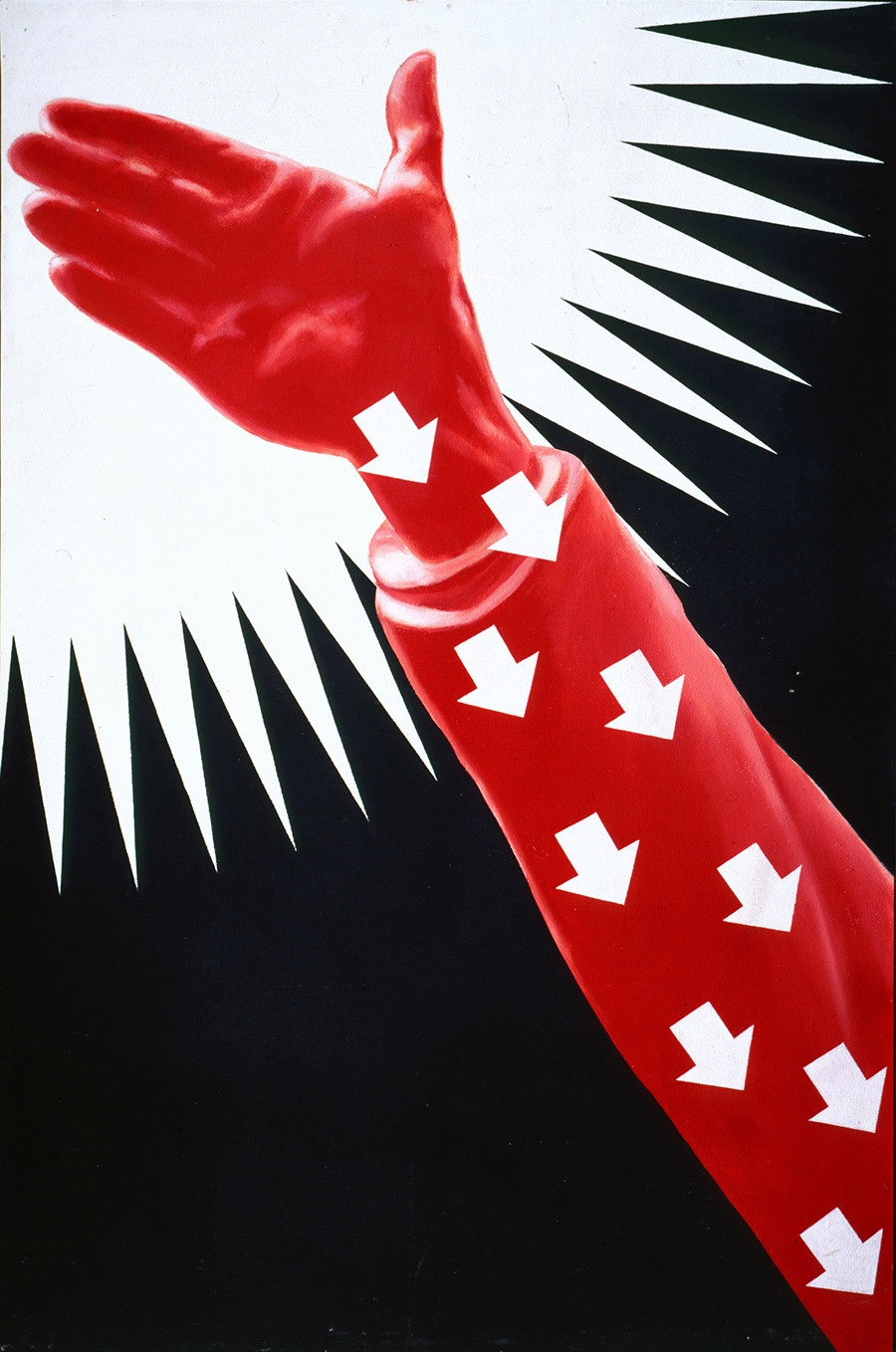 Komar and Melamid, the creators of Sots Art, who poked fun at the official art of Socialist Realism, approached Soviet realities in a deliberately poster-like fashion. It is not difficult to see in this outstretched hand the allusion to Soviet leaders Vladimir Lenin and Joseph Stalin, who have been hailed as having brought the darkened country to light. 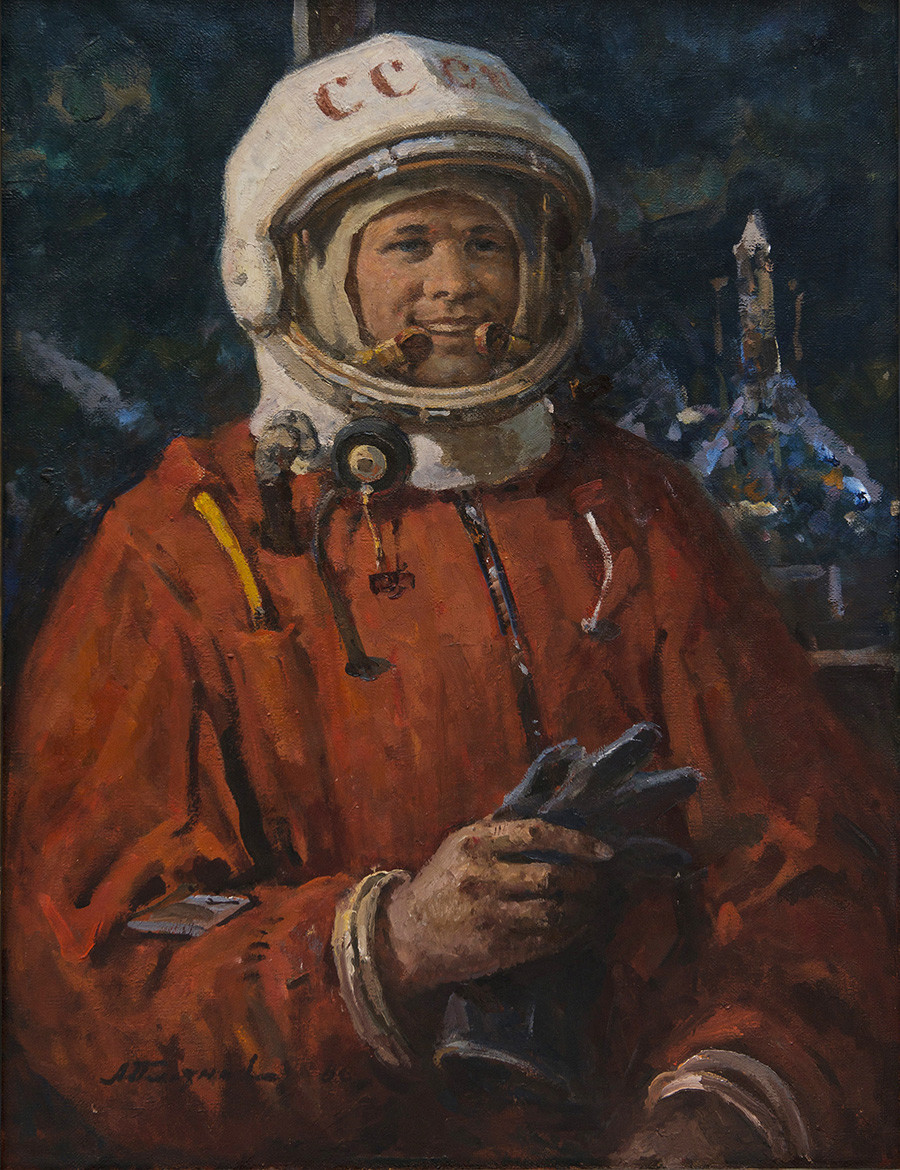 Andrey Plotnov painted one of the most famous portraits of Yuri Gagarin. Incidentally, he knew his subject personally, which gave his work a special resonance. 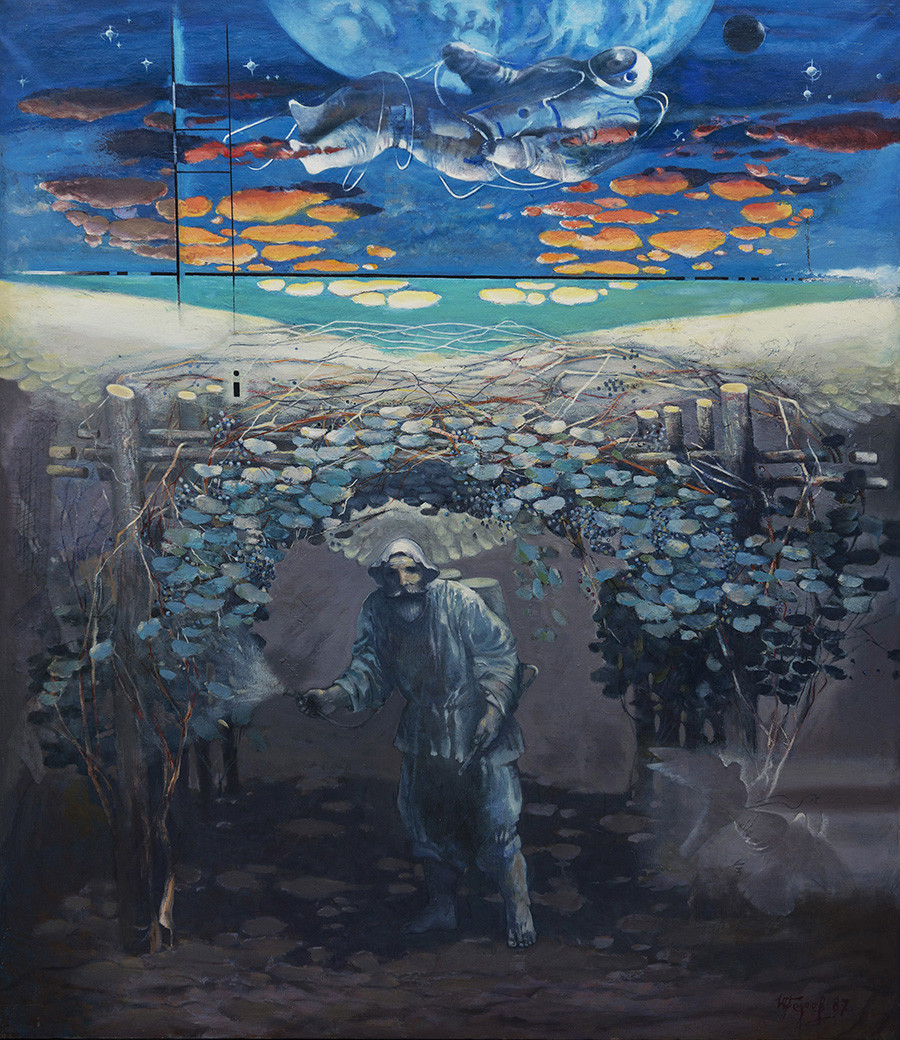 In this diptych, the native Ossetian artist Bedoev depicted a mirror image of space and Earth.

14. Gennady Shurshin. Humanity will not stay on Earth forever. 1988 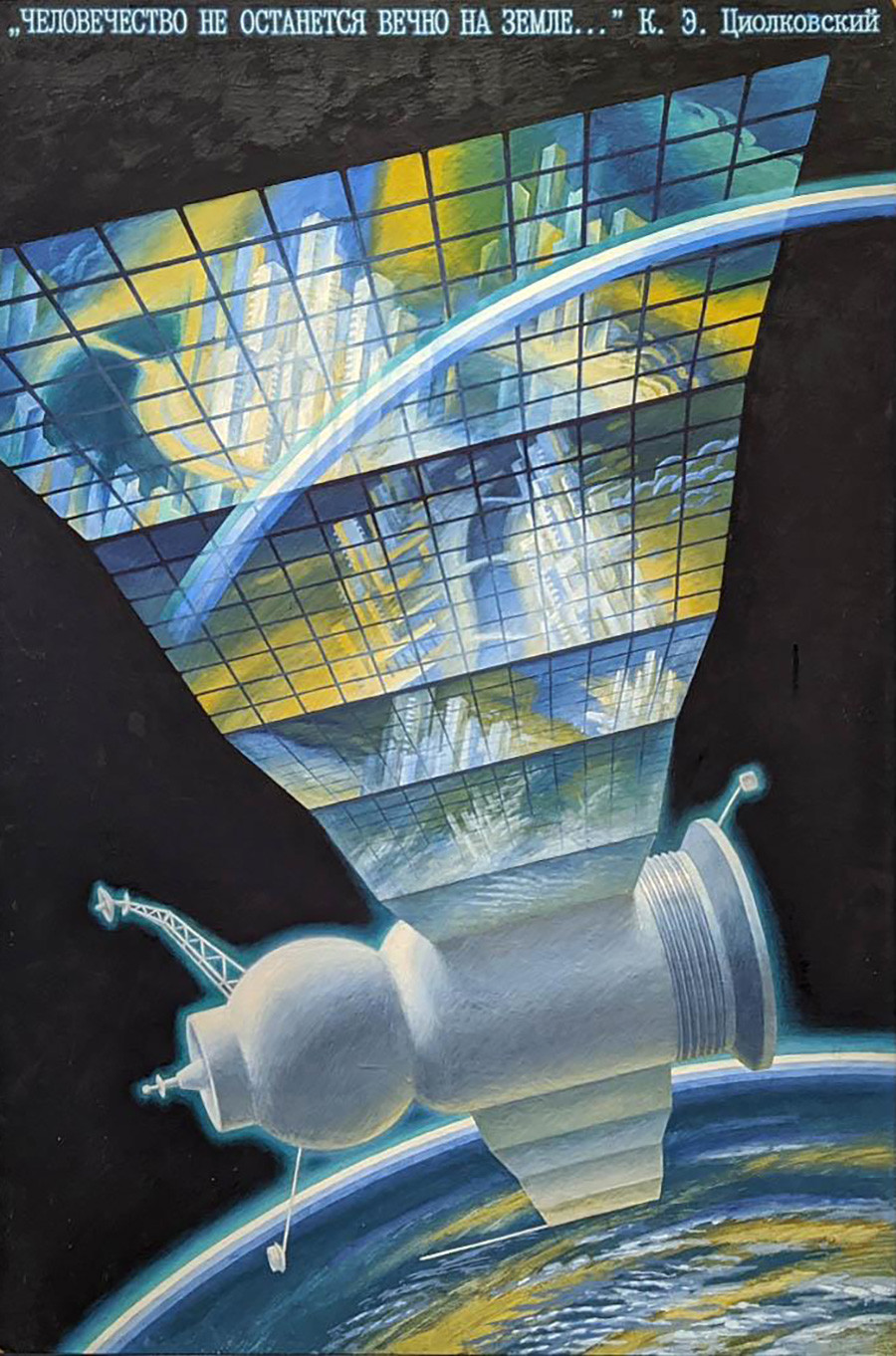 Shurshin fantasized about space exploration and the colonization of other planets, even signing his work with a quote from the founder of Russian cosmism, Konstantin Tsiolkovsky: “Mankind will not stay on Earth forever. 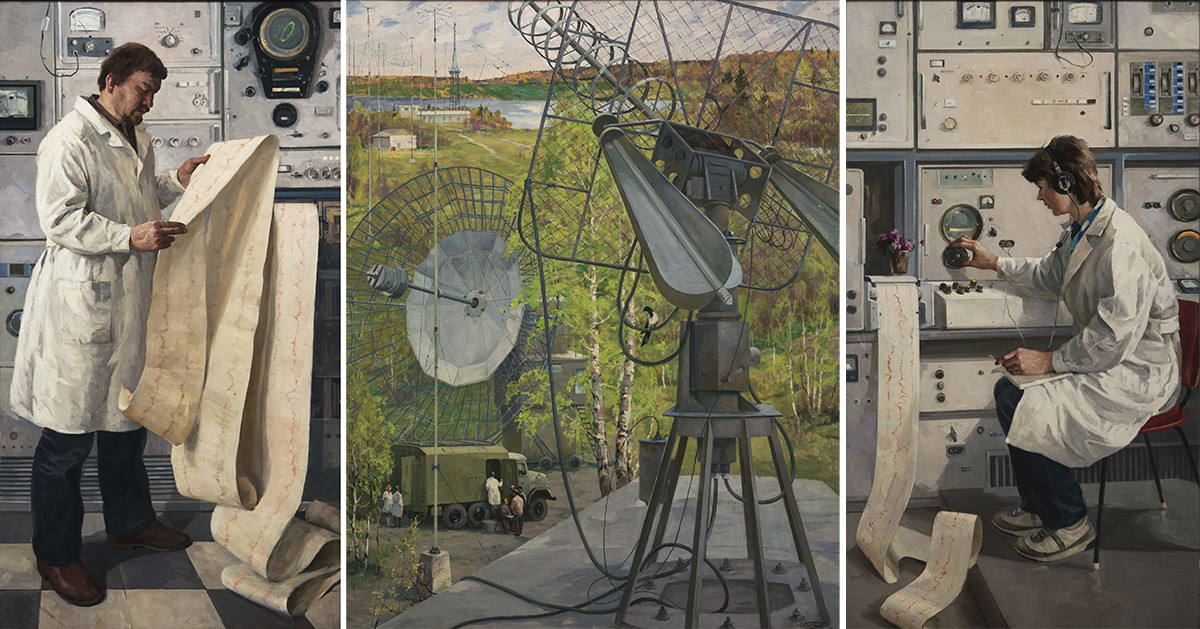 Soviet artist Pyaskovsky paid tribute to space industry workers returning to dry land, who unfairly remain in the shadows. Not as famous as cosmonauts, they nevertheless play an equally important role. 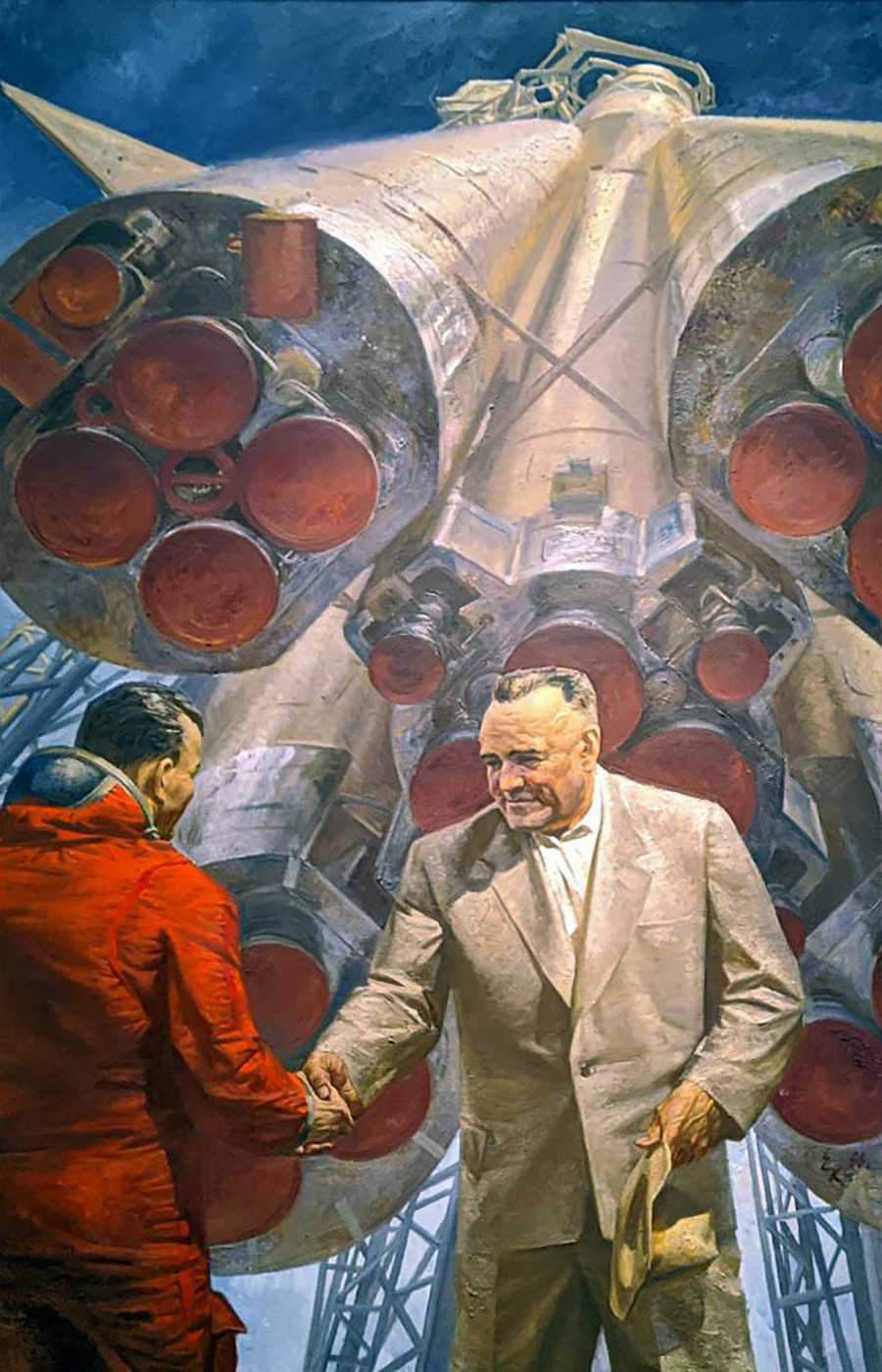 The photo shows the moment before Gagarin’s flight. His last act is to shake hands with the man who made spaceflight possible, Soviet engineer, true genius and father of practical astronautics, Sergey Korolyov. 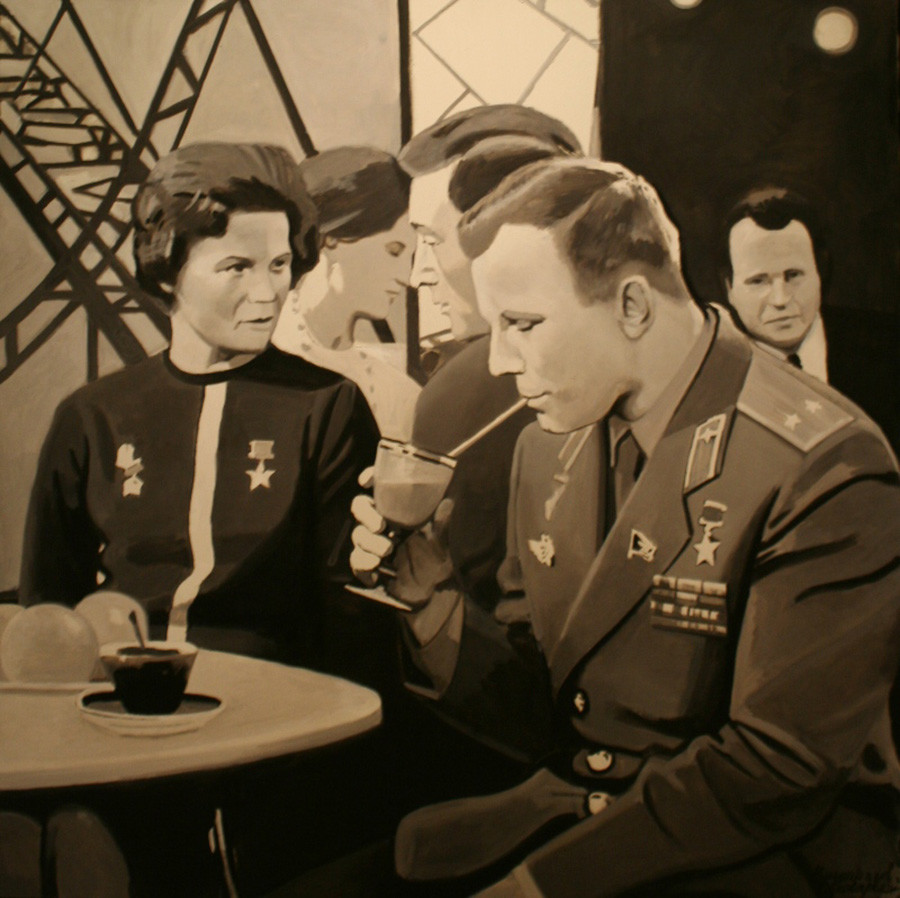 Artists continue to reflect on the theme of space to this day. One of the best-known contemporary pop-art duos, Vinogradov and Dubossarsky, performs here with a real photo: Gagarin drinking a cocktail on a New Year’s TV show. A reminder that the cosmonaut hero is still an ordinary guy. 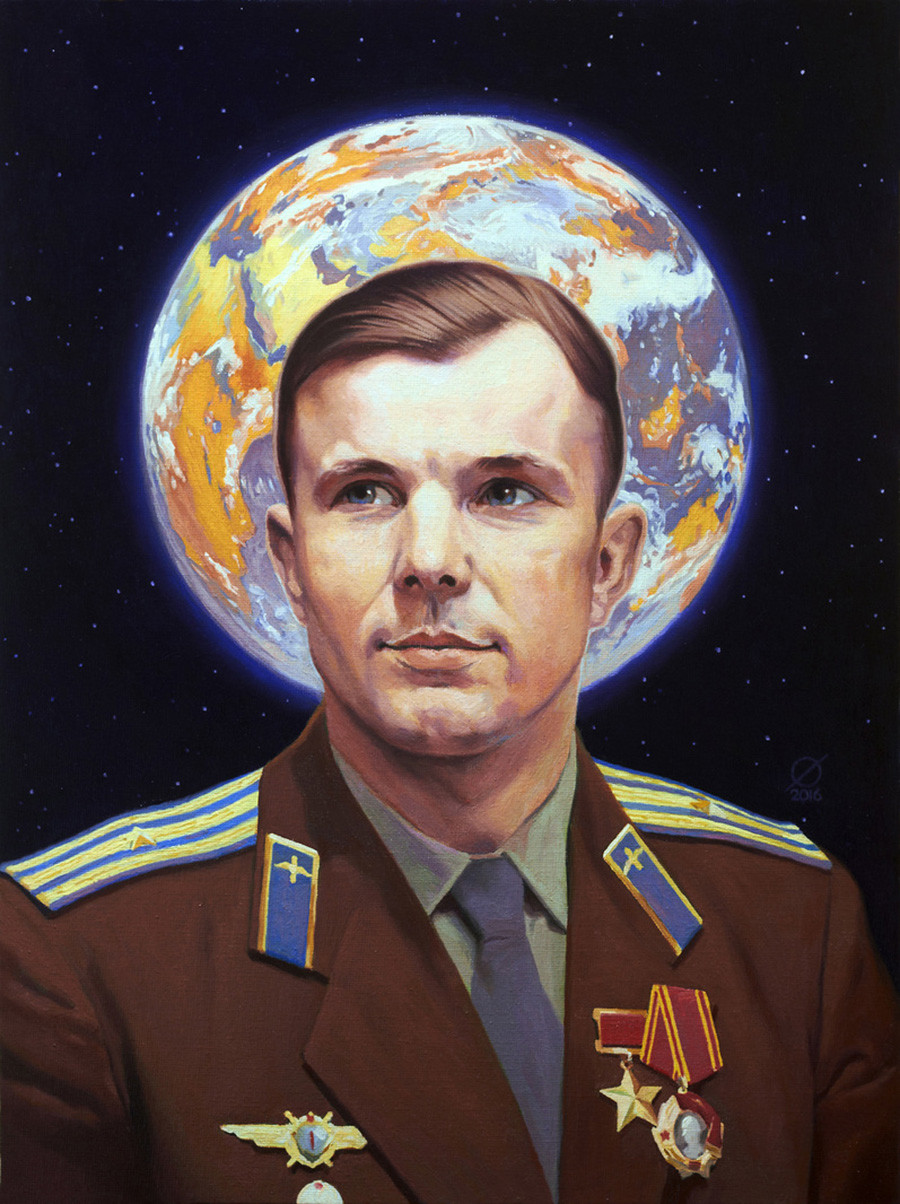 Members of the Doping-Pong art group create digital paintings and graphics in a retro-futuristic style. Their works combine modernity and Soviet aesthetics: pioneers, athletes and, of course, space. 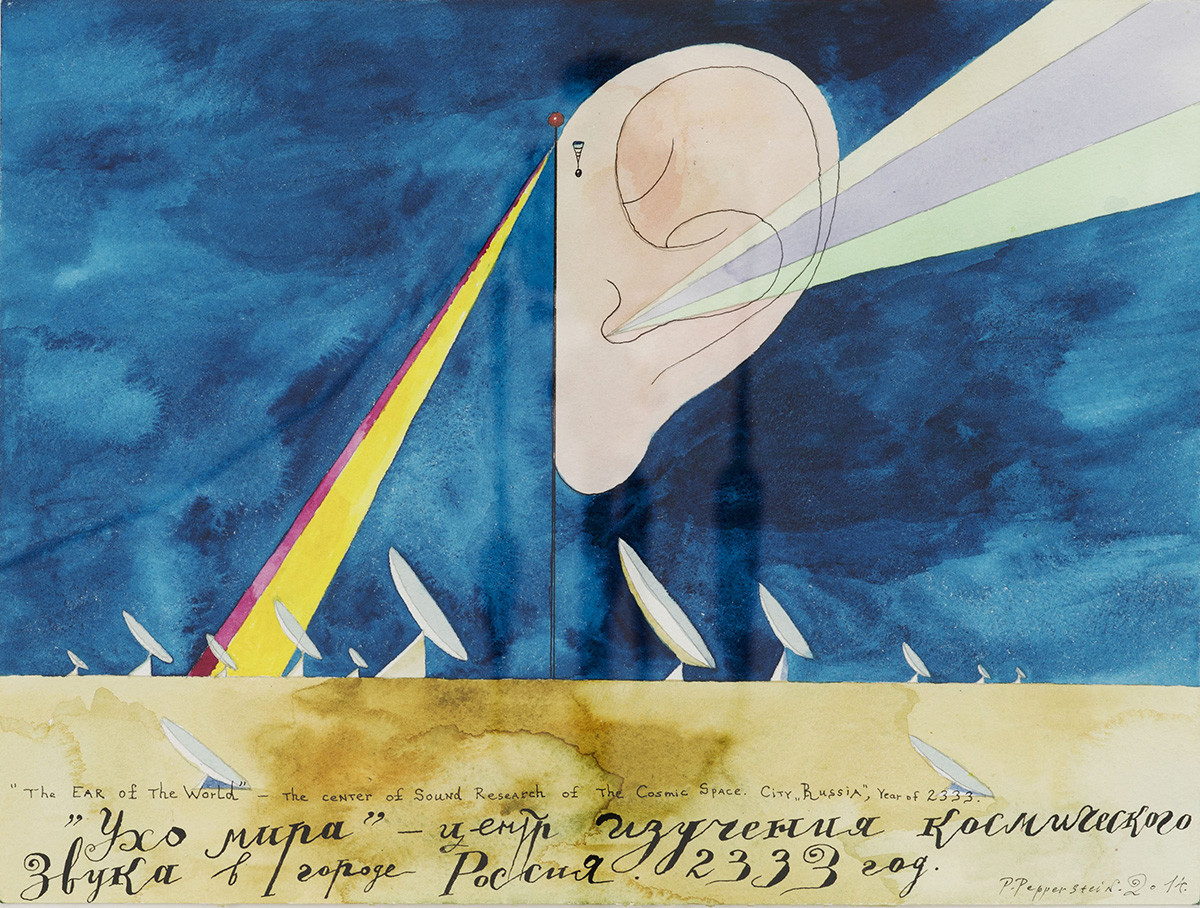 One of the most important figures in modern Russian art, Pavel Pepperstein imagined the year 2333 and what a center for the study of cosmic sound would look like.

Most of the above works are exhibited as part of the “Space As Art” exhibition at the ROSIZO exhibition center in Moscow until September 26, 2021.

If you use all or part of the content from Russia Beyond, always provide an active hyperlink to the original content.